Vietnam by Sea and Angkor Wat

Vietnam by Sea and Ankgor Wat

Day 15 - Siem Reap / Depart for the U.S. / Cross the International Date Line / Arrive in the U.S. or Canada

Le Lapérouse, launched in 2018, ushers in a new generation of five-star small ships, combining revolutionary design and a new standard of luxury for unparalleled cruising. Dock in smaller ports inaccessible to larger ships, where authentic cultural experiences and majestic scenery await you.

Learn more about the Le Lapérouse >

Two nights in the five-star Sofitel Legend Metropole Hanoi. Situated in the heart of the Vietnamese Capital, Sofitel Legend Metropole Hanoi has been Hanoi’s legendary landmark since 1901. The Hotel Metropole Hanoi was the first Sofitel Legend property in the world and is the recipient of numerous international awards for its fine service. This legendary landmark has contributed to the history and heritage of the city. The hotel has a long tradition as a luxury venue for prestigious events & as a popular rendezvous for business and leisure travelers including playwrights, ambassadors and heads of state.

Three nights in the five-star Sofitel Angkor Phokeethra hotel, which offers the discerning traveler the ultimate in comfort and refinement by combining the traditional architecture of Cambodia with elegant French colonial style to create a resort of unsurpassed luxury. Set amidst a landscaped lake garden and surrounded by lagoons, the hotel offers visitors a tranquil and relaxing atmosphere enabling them to cool down after a tiring day visiting under the heat.

In a land filled with more than 26,000 shrines, discover three of Bangkok’s most famous temples: Temple of the Golden Buddha, Temple of the Reclining Buddha—Bangkok’s largest—and Marble Temple, a magnificent white marble monastery. Wind your way to the Grand Palace via a long-tail boat and explore the Temple of the Emerald Buddha, Thailand’s holiest treasure. Visit the Jim Thompson House, the former home of the American who revitalized Thailand’s silk industry. Accommodations for three nights are in the five-star The Peninsula Hotel.

The Post-Program Option is available at additional cost. Details will be provided with your reservation confirmation. 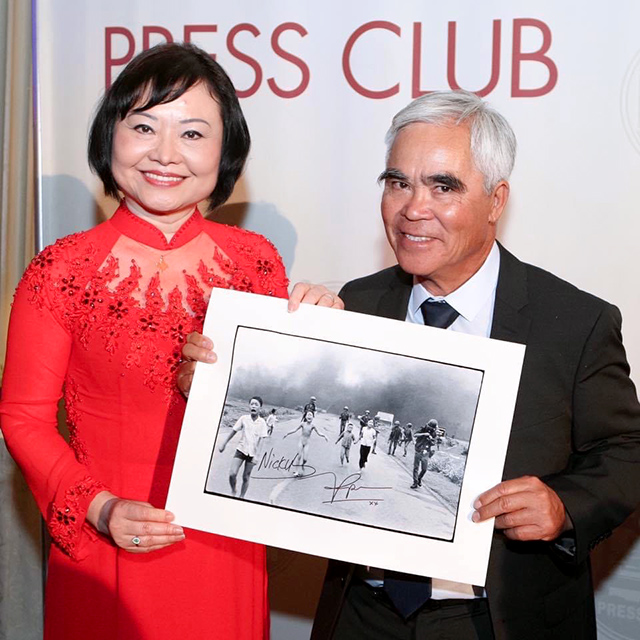 Kim Phuc—On June 8, 1972, 9-year-old Kim Phuc was photographed fleeing a napalm strike. The photograph, “Napal m Girl,” remains one of the most influential images from the Vietnam War. Today, Phuc is a UNESCO Goodwill Ambassador for Peace and the author of Fire Road, the inspirational story of her unexpected survival and unshakeable faith. She shares her experience at global events and has received awards and recognitions, including six honorary doctorates, for work supporting child victims of war and her commitment to global peace. She has also inspired the nonprofit organization KIM Foundation International.

Huỳnh Công Út, known professionally as Nick Ut, is a Vietnamese-American photographer who began taking photographs for the Associated Press in Vietnam at age 16 after his older brother, Huynh Thanh, also an AP photographer, was killed in combat. His photo of Phan Thi Kim Phuc running toward the camera from a South Vietnamese napalm strike made history and won the Pulitzer Prize, among other major photographic awards. Immediately after making the photo, he rushed her to a hospital, which saved her life. Ut continued covering the Vietnam War for AP and also worked in Tokyo before being transferred to Los Angeles in 1977. He still works for AP as a photojournalist, and is still in touch with Kim Phuc, now living in Canada, whom he calls every week. 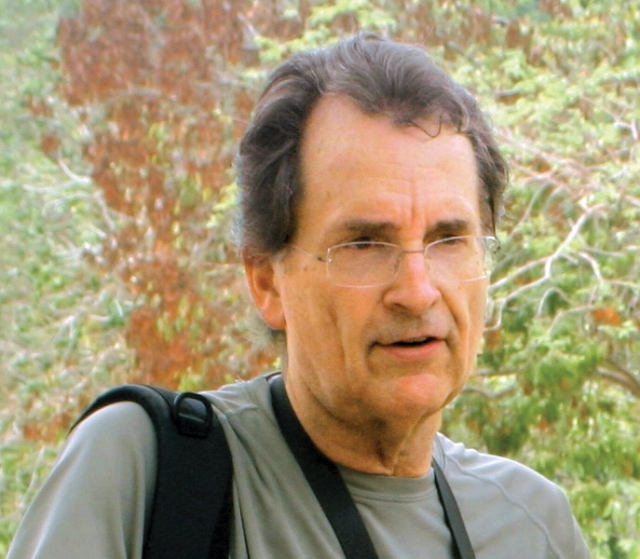 Jim Laurie is a distinguished international broadcaster, writer, and media consultant who has witnessed many defining moments in Asia’s history for over 50 years. He began covering Indochina for NBC News in 1972 and became the only American network correspondent to witness the fall of Saigon to the North Vietnamese in 1975. Laurie's memoir of his early days in Vietnam and Cambodia, The Last Helicopter: Two Lives in Indochina was published in April 2020. He is the recipient of a Peabody Award, two Emmy Awards, and an Amnesty International Award and has also co-produced, written, and directed several television documentaries.

The undeniable charm of this enigmatic capital city resides in its time-honored rituals and compelling fusion of Vietnamese, Chinese, and French-colonial influences. Wide leafy boulevards, modeled after the Champs-Élysées in Paris, are lined with stately Neoclassical mansions and palaces.

In Ba Dinh Square, the revered father of the nation lies in state in the granite Ho Chi Minh Mausoleum. Starkly juxtaposed against the Beaux Arts-style Presidential Palace, Ho Chi Minh’s modest two-room stilt house where he lived from 1958 until 1969, was built to reinforce the revolutionary leader’s image as a “man of the people.” Nearby, the 11th‑century One Pillar Pagoda is one of Vietnam’s most iconic temples, designed to resemble a lotus blossom (purity). Tour the Temple of Literature, a Confucian sanctuary and learning center since A.D. 1070 and a paradigm of traditional Vietnamese architecture.

Join your travel companions for a Welcome Reception in the hotel this evening.

Visit the mystical Hoan Kiem Lake—the mythical Lake of the Restored Sword—where a red wooden bridge leads to the jewel box Ngoc Son Pagoda. Visit the Hoa Lo Prison Museum, or “Hanoi Hilton,” where American pilots, including late Senator John McCain, were held as prisoners during the Vietnam War. In the 13th-century Old Quarter, stroll its 36 streets, named after guilds formed in the middle ages by resident craftspeople.

Transfer from historical Hanoi to Haiphong to embark the exclusively chartered Le Lapérouse.

Board a traditional Vietnamese junk for a private cruise and experience the ethereal beauty of Ha Long Bay, the “Bay of the Descending Dragon.” This UNESCO World Heritage Site is characterized by a seascape of over 1,600 emerald green pinnacles that soar from the bay’s tranquil waters. Cruise between limestone islands with wave-eroded caves and walk among the tapering stalactites and stalagmites in the natural grottoes of Thien Cung, the Heavenly Palace Cave.

Join the Captain this evening for a Welcome Reception.

The UNESCO World Heritage Site of Hue, located on the banks of the Perfume River, was the Imperial City of the Nguyen kings from 1601 to 1945. Explore its Imperial Citadel and the massive ramparts and moat dating from the 18th and 19th centuries. Tour the Imperial Enclosure of the emperor’s residence, palaces, temples, and state buildings and the Forbidden Purple City, a citadel within a citadel formerly reserved for the royalty of the Nguyen Dynasty. Visit the 17th-century Thien Mu (Heavenly Lady) Pagoda and the tomb of Emperor Tu Duc, built and designed by the emperor himself during the Nguyen dynasty.

Surrounded by the Marble Mountains and clear-blue waters, coastal Da Nang is known for its exquisite Museum of Cham Sculpture, exhibiting the world’s largest collection of indigenous Cham sandstone art and statues dating from the fifth to 15th centuries.

Prior to the 14th century, ancient Hoi An was the commercial capital of the Cham Empire and a strategic global port for the spice trade. This captivating UNESCO World Heritage Site preserves more than 800 buildings from the 15th to 19th century that emanate a timeless, mystical aura. Learn about the city’s heritage at the Hoi An Museum of History and Culture housed inside the 17th-century Quan Am Pagoda. Visit the grand temple of Phucn Kien Assembly Hall, a masterpiece of Fujian artistry. Stroll the city’s famed handicraft workshops and colorful riverside market, and admire the graceful arc of the 18th-century Japanese Covered Bridge.

This evening, attend a traditional folklore performance on board the ship.

Disembark the ship in Saigon and visit the astonishing Cu Chi Tunnels. This underground complex built by Viet Cong totaled 75 miles, stretching from Saigon to the Cambodian border, and included living quarters, kitchens, and field hospitals.

Fly to Siem Reap, Cambodia, and check into the five-star Sofitel Angkor hotel.

Angkor, a UNESCO World Heritage Site, was once the capital of the Khmer Empire. Located in the lush jungles of northern Cambodia, it is one of the world’s most important archaeological sites. Near Siem Reap, the Temple of Angkor Wat is the largest religious structure in the world, built in the 12th century by King Suryavarman II to honor the Hindu god Vishnu. Angkor Wat stands in testament to the centuries-long grandeur of the prosperous Khmer Empire.

The astounding Banteay Srei Citadel of the Women is considered the ultimate expression of Khmer genius. Constructed in the 10th century from rose-pink sandstone, the temple is believed to have been built by women based on the intricacy of the elaborate three-dimensional carvings and filigree relief work that adorn its peaked buildings.

On the banks of the Siem Reap River, the monumental walled city of Angkor Thom was the last capital of the Khmer Empire. The towers of its Bayon Temple have approximately 200 stone faces and bas-relief sculptures depicting historical scenes from everyday life of the Angkorian Khmer. The area surrounding the complex includes the ruins of the 11th-century Baphuon “temple-mountain” and the intricately carved Terrace of the Elephants, Terrace of the Leper King, and Royal Palace.

Visit a local workshop which provides training for thousands of Cambodians to preserve their traditional, cultural handcrafts.

This evening, attend the Farewell Reception in the hotel.

Following breakfast in the hotel, transfer to the airport for your flight to the U.S. or Canada, crossing the International Date Line, or continue on the Bangkok Post-Program Option.