Day 6 - Cruising the Bay of Biscay

Le Bellot, launched in 2020, and Le Champlain, launched 2018, usher in a new generation of five-star small ships, combining revolutionary design and a new standard of luxury for unparalleled cruising. Dock in smaller ports inaccessible to larger ships, where authentic cultural experiences and majestic scenery await you.

Experience the streetscapes and medieval passageways of Lisbon. Savor Portuguese art on a tour of the Bairro Alto District and stop by the captivating fortress of Belém Tower. Enjoy a scenic drive to Sintra. Accommodations are for two nights in the deluxe Dom Pedro Lisboa.

Explore the storied history of London, a city that continues to rewrite its narrative. Visit the Tower of London and Westminster Abbey, both UNESCO Sites, and step into Churchill’s Cabinet War Room—which offers a rare glimpse into a secret World War II bunker. Spend two nights in the five-star Intercontinental London Park Lane.

The Pre-Program and Post-Program Options are available at additional cost. Details will be provided with your reservation confirmation. 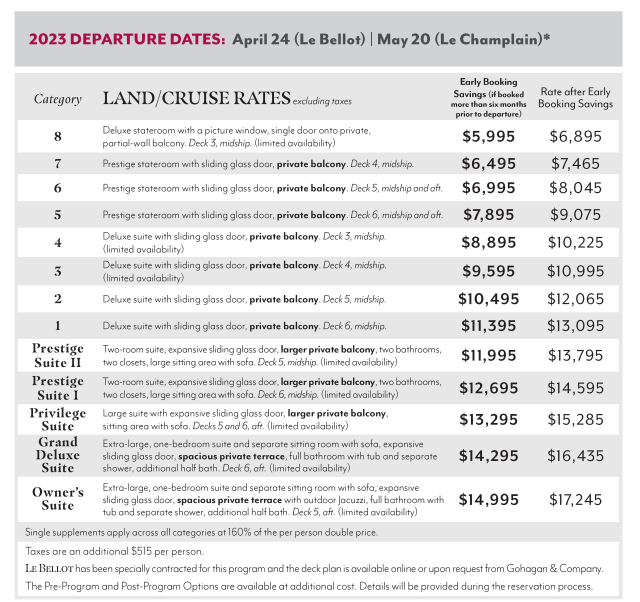 Discover Oporto, where you will fall under the spell of its historical center of Ribeira, a UNESCO World Heritage Site. Visit the Gothic Igreja de São Francisco, noted for its Baroque interior, and the Neoclassical Palácio da Bolsa, where designs of the gilded Arabian Hall were inspired by the Alhambra in Granada. Attend the Captain’s Welcome Reception.

Travel to the hills of Galicia, one of Spain’s 17 autonomous communities. Golden-hued granite buildings and arcaded squares grace Santiago de Compostela, a UNESCO World Heritage Site and one of Spain’s most beautiful cities. Stroll along medieval pedestrian streets to the expansive Praza do Obradoiro, flanked by the glorious Romanesque cathedral.

Enjoy a day at sea, where you can choose to attend various educational lectures.

The UNESCO World Heritage-designated Mont-Saint-Michel is a soaring masterpiece isolated beyond a stretch of saltwater marsh. Admire the serene cloisters, barrel-roofed réfectoire, and Gothic Salle des Hôtes of the 13th-century La Merveille and the magnificent Église Abbatiale with a transept that rests on solid rock.

Make the solemn pilgrimage to the historic Normandy D-Day beaches, site of the largest seaborne invasion in history and walk where Allied forces landed on D-Day. Following lunch, continue to Arromanches to see the remnants of Mulberry Harbor.

This morning, attend an insightful lecture from Professor Eisenhower on board the ship.

Cruise the English Channel and continue up the River Thames, a memorable passage possible only by small ships. Cruise under Tower Bridge and dock alongside HMS Belfast for an overnight you will never forget. Attend the Captain’s Farewell Reception this evening.

Following breakfast, disembark and continue on to the London Post-Program Option or transfer to the airport for your return flight to the U.S. or Canada.