A River Cruise Along the Danube

Join this extraordinary, 13-day journey along nearly the entire length of the fabled Danube River, from the Habsburgs’ imperial capital of UNESCO-inscribed Vienna to the captivating Black Sea. Cruise for nine nights aboard the exclusively chartered, deluxe small river boat Amadeus Star and spend two nights in Romania’s elegant capital of Bucharest. Cruise through the Iron Gates and discover the eastern Danube River Valley. Visit the ancient land of Bulgaria, the young territories of Serbia and eastern Croatia, Hungary’s fabled Puszta (plains) and the UNESCO World Heritage-designated castles, palaces, and squares of Budapest. Vienna Pre-Program and Transylvania Post-Program Options.

The elegant and meticulously crafted Amadeus Star features all the comforts of a refined and traditional hotel. The 82 stylish staterooms and suites are among the most spacious of any European river boat (172 to 284 square feet). Suites include a private balcony, and select staterooms feature a unique floor-to-ceiling window that lowers to French-balcony height at the touch of a button. Accommodations have two twin beds or one queen bed, individual climate control, sitting area, and private bathroom with shower. Most have a minibar.

Learn more about the Amadeus Star >

The former seat of the Habsburg Empire, Vienna is one of Europe’s most beautiful and cultural cities—showcasing an open-air museum of splendid Baroque architecture in its UNESCO-inscribed historical center. Drive along the famous Ringstrasse to see this remarkable city’s most important landmarks and visit the iconic, Gothic-style Stephansdom (St. Stephen’s Cathedral). Learn more about the Austrian Empire in the Habsburgs’ summer estate at Schönbrunn Palace, a UNESCO World Heritage Site. Accommodations are for two nights in the five-star Hotel Imperial.

Enjoy mysterious Transylvania—Latin for “the land beyond the forest”—and central Romania’s rich medieval heritage. Admire the auburn splendor of the Carpathian Mountains, an evocative backdrop of grand medieval castles with soaring spires where the mythical Gothic narrative of Count Dracula is kept alive through local storytelling. Tour the elegant, 19th-century Peleş Castle and the imposing, 14th-century Bran Castle, commonly known as “Dracula’s Castle” and once the beloved Queen Marie’s summer residence. See the Gothic Black Church in Brasov, one of the best-preserved cities in Europe, and tour the UNESCO World Heritage medieval town of Sighisoara, the birthplace of Vlad Tepes (Dracula). Accommodations for two nights are in the ideally located, deluxe Aro Palace in Brasov and one night in the five-star Athenèe Palace Hilton Bucharest.

Pre- and Post-Program Options are available at additional cost. Details will be provided with your reservation confirmation. 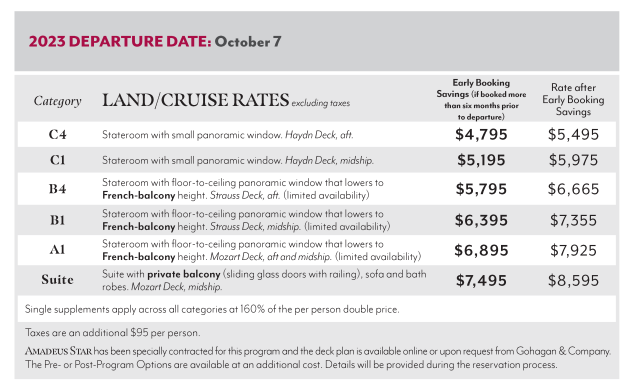 Arrive in Vienna. Embark the deluxe Amadeus Star and attend the Captain’s Welcome Reception and dinner this evening.

Dock in Slovakia’s capital of Bratislava in the foothills of the Carpathian Mountains. In this festive “little big city,” 21st‑century life unfolds amid 9,000-year-old history. Enjoy a walking tour of the Staré Mesto (Old Town) which showcases beautifully restored medieval, Renaissance, and 19th-century architecture that is among the finest in Central Europe.

Visit the Gothic 14th-century Cathedral of St. Martin, where 19 Hungarian kings and queens were crowned, and the elaborate Primate’s Palace, famous for its rare collection of 17th-century English tapestries. See St. Michael’s Gate, Bratislava’s oldest preserved medieval fortification, built in 1300, and the eclectic 14th-century Old Town Hall, embedded with a cannonball fired by Napoleon Bonaparte during his siege of the city in 1809.

Austrian-born but nevertheless the “most Hungarian Habsburg,” Archduke Joseph is credited with creating in Budapest an imperial capital that rivaled Vienna. Swathes of historical Budapest have been granted UNESCO World Heritage status including the embankments of the Danube, featuring grandiose monuments of the centuries-old twin cities of Buda and Pest; the medieval Buda Castle Quarter, site of the Roman city of Aquincum; and the illustrious palaces, mansions, and squares of elegant Andrássy Avenue.

In Pest, see the Gothic Revival, limestone Parliament Building, the second largest parliament in Europe, completed in 1904. At UNESCO-inscribed Heroes’ Square, admire monuments honoring Magyar chiefs who occupied the Carpathian Basin and established the Kingdom of Hungary in A.D. 896. Along Andrássy Avenue, see the 19th-century, neo-Renaissance Hungarian State Opera House, one of the world’s most beautiful performing arts venues.

Cross the landmark Chain Bridge, the first stone bridge to link river-level Pest to the hills of Buda. On Castle Hill, visit the late-19th-century, neo-Romanesque Fisherman’s Bastion which affords exceptional city views, and the astonishing Gothic-style St. Matthias Church, where Charles I, the last Habsburg ruler, was coronated in 1916.

Enjoy the afternoon at leisure in Budapest.

Enjoy views of Hungary’s scenic, protected Puszta, one of Europe’s largest expanses of rolling grassland plains, where pastoral traditions have prevailed for over two millennia. Visit a horse farm to see a performance of authentic Hungarian horsemanship and enjoy a traditional lunch of regional specialties in the farm’s restaurant.

In Kalocsa, known for its intricate, brightly hued Hungarian embroidery, visit the House of Folk Art and Paprika Museum for further insight into this local art form and the traditional methods of cultivating paprika—the spice referred to as “red gold.”

Visit remarkably renewed Vukovar, “The Hero’s Town.” See restored landmarks and monuments that stand as powerful symbols of resistance, including 18th-century Eltz Manor, a paradigm of Croatian Baroque architecture; the iconic Grand Hotel, famously purchased by the city’s Labor Movement in 1919; and the imposing red-brick water tower. Visit the Baroque Church of Sts. Philip and James and see its intricate stained-glass windows.

“The Athens of Serbia,” Novi Sad is Serbia’s vibrant second city. Enjoy a walking tour of the pedestrian-only Stari Grad (Old Town) to see the city’s most beautiful buildings—the neo-Gothic Name of Mary Church and the neo-Renaissance Town Hall. Crowning the Old Town, the 18th-century Petrovaradin Fortress, the “Gibraltar on the Danube,” is Europe’s second largest fortress. On a panoramic tour of quaint Sremski Karlovci, see the lovely 19th-century Patriarchate Court and the Orthodox Church of St. Nicholas with its impressive twin bell towers. Savor two regional favorites—wine and honey—with tastings in a local wine cellar and the Museum of Beekeeping.

Belgrade traces its origins from the Stone Age, which was then followed by Romans, Byzantines, Serbs, Turks, and Austrians, each leaving a lasting impression. Enjoy a walking tour featuring historical Terazije Square and the domed Temple of St. Sava, Serbia’s patron saint.

Enjoy spectacular views of the Danube Gorge in its dramatic glory. Cruise through southeastern Europe’s picturesque scenery, passing the Golubac Fortress, guardian to the legendary Iron Gates, naturally carved by the Danube River.

Dock in Nikopol and travel to the 12th-century hillside village of Arbanasi, where nearly 90 historical buildings are protected monuments. See its distinctive stone houses, famous for their fortified Bulgarian architecture and richly decorated interiors. Learn more about the comfortable life of a 17th-century merchant in the perfectly preserved Konstantsaliev House and admire elaborate icons and frescoes in the 15th-century Birth of Christ Church.

Continue to the medieval town of Veliko Tarnovo, capital of the Bulgarian Empire between the 12th and 14th centuries. Following lunch in a local restaurant, enjoy a brief walking tour of the historical town center and see the impressive 12th-century Tsarevets Fortress.

Reboard the boat in Ruse.

The principal Romanian seaport of Constanta was established in the sixth century B.C. as the Greek trading settlement of Tomis. The port later became a part of the Roman, Byzantine, and Ottoman empires. Today, it remains an amalgam of these historic civilizations. Explore Constanta’s Old Town on a walking tour and view the Roman poet Ovid’s famous statue in Ovidiu Square. See the many elegant mansions and hotels constructed during the 19th century when King Carol I revived the city. This afternoon, enjoy lunch at a local restaurant and time at leisure.

En route to the boat, stop in Adamclisi, where the Tropaeum Traiani commemorates Roman Emperor Trajan’s victory over the Dacians in A.D. 102.

Attend the Captain’s Farewell Reception and dinner on board the boat this evening.

Disembark the ship in Feteşti and drive through the rolling Romanian campii (plains) to the fascinatingly diverse capital city of Bucharest. Along the Grand Boulevard, visit the monumental Palace of Parliament, Nicolae Ceausescu’s most infamous architectural vision, and the open-air National Village Museum.

Visit the National Art Museum in the 19th-century Royal Palace, housing Romania’s finest collection of artistic treasures. The afternoon is at leisure.

Enjoy the Farewell Reception in the hotel in the evening.

After breakfast, continue on the Castles of Transylvania Post-Program Option or transfer to the airport for your return flight to the U.S.